As you can see, the K9 park at the Salt Lake City KOA meets with Jamie’s approval. And Kinnon, too. In addition to the dog area, there is access to the walking trail along the Jordan River. 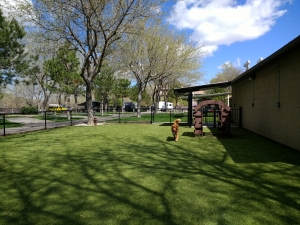 We have stayed here a couple of times before, and enjoy the relative quietness for a park in an urban setting. A light rail station is a short five minute walk.

What KOA does at this park is separate the long-term sites from those staying a few nights or so. The sites are relatively wide and level.

Tomorrow we’ll leave for Moab, with breakfast at a Cracker Barrel and a stop at Columbia and Eddie Bauer outlets in Lehi. We then will try our hand at boondocking and using our new solar system.

The Dark Side traffic

Our second day was a real challenge. The warning lights we ended the first with hadn’t disappeared, so we called MB in Lynnwood and headed north. Traffic was terrible, hence my attribution “The Dark Side.” The drivability reduced to full “limp mode” four miles south of the dealer, so we were lucky in the stops and goes.

Scott at Mercedes-Benz was an angel. He had received my message that we were on the way in and was ready for us. Four hours later we were back on the road. A rear wheel sensor was replaced at no charge. We ordered in some Thai for lunch and scores of folks wanted to pet the red and white puppies.

We drove a short way to Dash Point SP for the night rather than trudge through Tacoma traffic and had a decent drive to the KOA in Cascade Locks today. The rig is cruising as it should.

Kinnon and Jamie are a joy to travel with, calm and polite with each other. We’ve been getting pics of Allie and it’s obvious she’s have way more fun across the street than putting up with the Tollers!

The first day could not have been more beautiful. Well, maybe it could have been if we were on the Big Island, but I’ll keep this reality-based. We made reservations on the 0930 Coupeville ferry, but were up early with enough excitement to drive by the Courtyard Café for sacks of breakfast and make the 0845 boat. Admiral Inlet was smooth and the skies were overcast.

The designation today was the KOA in Winthrop WA and lunch with friends in Burlington. Billy’s Café had great service and OK food. Their walls were all adorned with Seahawks signs, but it was strange there was no TV, so maybe they do a terrific take-out business on game day.

Highway 20 across Washington begins in Discovery Bay and is one of the most scenic roads in the state as it winds its way across North Cascades National Park toward Idaho. Washington Pass was clear and bright as we left the clouds for the sun. Thankfully there was very little traffic.

…I want to beg you, as much as I can, dear sir, to be patient toward all that is unsolved in your heart and to try to love the questions themselves like locked rooms and like books that are written in a very foreign tongue. Do not now seek the answers, which cannot be given you because you would not be able to live them. And the point is, to live everything. Live the questions now. Perhaps you will then gradually, without noticing it, live along some distant day into the answer.

We need another and a wiser and perhaps a more mystical concept of animals. Remote from universal nature, and living by complicated artifice, man in civilization surveys the creature through the glass of his knowledge and sees thereby a feather magnified and the whole image in distortion. We patronize them for their incompleteness, for their tragic fate of having taken form so far below ourselves. And therein we err, and greatly err. For the animal shall not be measured by man. In a world older and more complete than ours they move finished and complete, gifted with extensions of the senses we have lost or never attained, living by voices we shall never hear. They are not brethren, they are not underlings; they are other nations caught with ourselves in the net of life and time, fellow prisoners of the splendour and travail of the earth.

We look with uncertainty beyond the old choices for clear-cut answers to a softer, more permeable aliveness which is every moment at the brink of death; for something new is being born in us if we but let it. We stand at a new doorway, awaiting that which comes… daring to be human creatures, vulnerable to the beauty of existence. Learning to love.